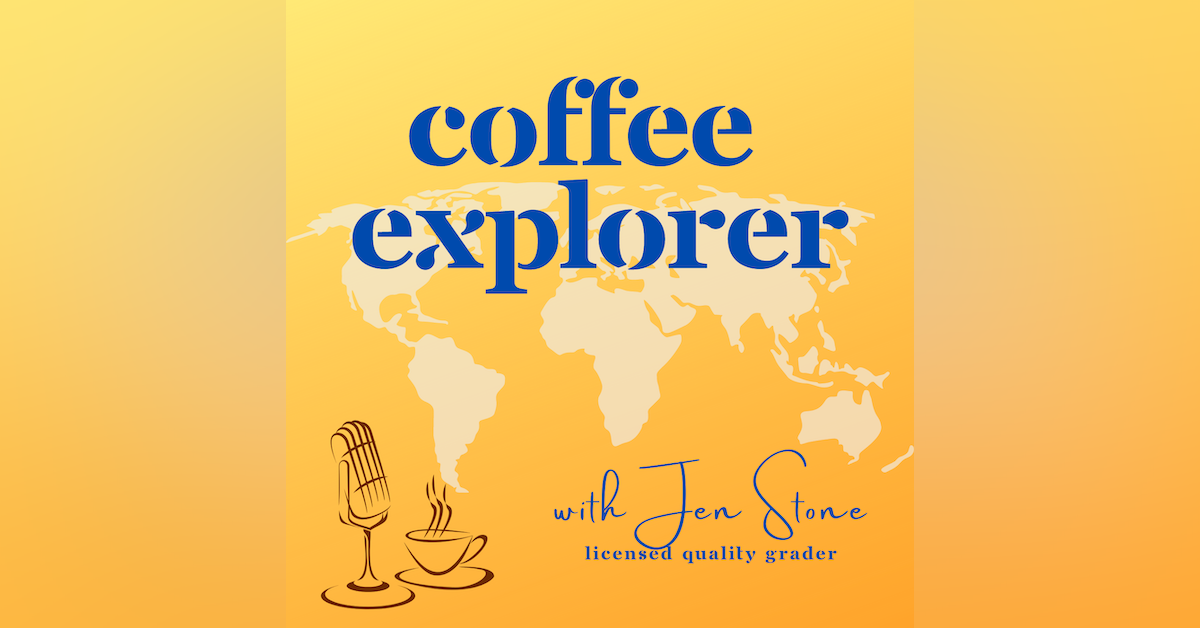 Want to learn about the latest coffee talk from Jen Stone? Sign up - it's free, no spam, and never more than once per week.

“Coffee may be purchased by the packet, pound or cup, but weight (the quantity measure) has value only insofar as it has acceptable flavor (the quality measure).  Coffee has basic value:  it gives pleasure and satisfaction through flavor, aroma and desirable physiological and psychological effects.”
Michael Sivetz

I.  A Brief History

The most famous version of the origin of coffee goes like this:  Once upon a time in the , , , lived a goatherd named Kaldi.  Kaldi was a sober, responsible goatherd, whose goats were also sober, if not responsible.  One night Kaldi’s goats didn’t come home, and in the morning he found them dancing in abandoned glee near a shiny, dark-leaved shrub with red berries.  Kaldi soon determined that it was the red berries on the shiny, dark-leaved shrub that caused their eccentric behavior, and it wasn’t long before he was dancing, too.

Finally a learned innam from a  local monastery came by, sleepily, no doubt on his way to prayer.  He saw the goats dancing, Kaldi dancing, and the shiny, dark-leaved shrub with the red berries.  Being of a more systematic turn of mind than the goats or Kaldi, the learned innam subjected the red berries to various experimental examinations, one of which involved parching and boiling.  Soon neither the innam nor his fellows fell asleep at prayers, and the use of coffee spread from monastery to monastery, throughout Arabia Felix, and from there to the world.  We never find out whether Kaldi and his goats dropped dead from exhaustion and caffeine poisoning, or learned to control their habit.

II.  The Nature of Coffee

The coffee plant is a shrub that belongs to the family Rubiaceae, genus Coffea.  Some dozens of species of the genus Coffea are known, but only two are significant in economic terms:  Coffea Arabica and Coffea canephora (also known as Arabica and Robusta, respectively), being the only two that are cultivated on a large scale.  Each of these two species comprises several varieties, some derived from natural mutations and some the results of genetic engineering.   Robusta coffees do not have the fragrance or flavor of the best Arabica coffees but they are more resistant to disease and grow at lower altitudes.

The coffee plant grows in countries that lie beween the two Tropics, in zones where there are no seasonal climatic changes:  there it is always summer or something between spring and summer.  Plants are therefore evergreen and bear fruit in a continuous cycle.  Coffee plants are no exception and lacking rising spring temperatures to prompt flowering, as is the case with plants in our part of the world, they depend on rainfall to this end.  This means that following every rainfall, after about two weeks the plant will flower:  if it rains ten times in a year, the plant will flower ten times.  Therefore, if the rainfall is distributed throughout the year, you find plants simultaneously bearing flowers, ripening fruit and full ripe fruit.

After the flowering period, which lasts only a few days, the ovary of the fertilized flower rapidly develops into a fruit that is initially green in colour; by 6-10 weeks the berry has already reached its full size.  During the final weeks the berries change color, becoming first yellow and eventually bright red, with the exception of a few varieties such as Bourbon whose ripe fruits are yellow.

One interesting fact to remember about coffee:  Each coffee tree yields, on the average, one pound of beans per year.

Harvesting is one of the most important factors in how coffee tastes.  As has been stated, coffee berries do not always ripen uniformly.  Therefore, the conscientious grower who wants to get a high price for his coffee will pick the berries selectively; he will go over his trees again and again picking only ripe berries.  Where coffee is carelessly harvested, the berries are stripped just once from the tree, ripe, unripe, and overripe all together.

Once it is picked, coffee can be prepared either by the “dry” method which produces what is called “natural” coffee, or by the “wet” method, which produces “washed coffee”. The “dry” method, which is the older, more primitive method, simply involves drying the berries in the sun or in a mechanical dryer, and later stripping the hard, shriveled husk off the bean, either by modern machine or with a grindstone or mortar and pestle.

The wet method removes most of the covering from the bean before it is dried.  Since the moist bean is liable to damage if treated roughly, the covering must be removed gingerly, layer by layer.  First the skin and pulp are gently stripped off by machine.  This leaves the beans covered with a sticky gluey substance, which if removed mechanically, would damage the bean.  Instead, the beans are soaked, and natural enzymes literally digest or ferment this slimy layer off the bean.  This step is called “fermentation.”

Next, the coffee is gently washed, and finally dried, either by the sun in open terraces, where it is continuously turned and stirred by workers, or in large mechanical driers.  This leaves a last thin skin covering the bean, called the “parchment” or “pergamino.”  Some coffee is sold and shipped in its parchment cover but most often a last machine called a “huller” is used to remove it before shipping.  The huller is also designed to polish the coffee, giving the flinty, dry beans a clean, glossy look especially important to specialty roasters, who sell their coffee in whole bean.

Wet processed coffee is not necessarily better than dry-processed coffee.  Wet processed coffees generally bring higher prices in world markets.  Such coffees tend to be more finely flavored for several reasons:  generally, the better coffees are prepared by the more costly wet method; only ripe cherries are picked for preparation by the wet method whereas coffee produced by the dry method often includes immature and over-ripe cherries; also, allowing the beans to ferment for a short time after the pulp has been removed is said to enhance the flavor.  Processed with care, however, natural coffees can be as good or better than washed coffee.

Dry processed arabicas are often used as the base of espresso blends then enhanced with wet processed Arabica for flavor and a small amount of robusta for body.  The wet processed Arabica must not be used in too high a proportion for two reasons:  their characteristic acidity is heightened in the preparation of espresso coffee, and their consistency is often very hard and tenacious; after grinding, the particles are still highly homogenous.  To encourage the development of body in the coffee it is better to have particles of different sizes in the ground coffee, as occurs with the dry-processed arabicas.

Unroasted coffee gives no clue as to what it might become.  The beans do not have the characteristic look, smell or taste of coffee.  Most people do not even recognize the contents of the freshly-imported bags.

Roasting is simple in theory:  The beans must be heated, kept moving so they don’t burn or roast unevenly, and cooled when the right moment has come to stop the roasting.  Coffee which is not roasted long enough or hot enough to bring out the oil will have a pasty, nutty, or bread-like flavor.  Coffee which is roasted too long or at too high a temperature will be thin-bodied, burned, and industrial-flavored; very badly burned coffee will taste like old sneakers left on the radiator.  Coffee roasted too long at too low a temperature will have a baked flavor.

Most roasting equipment uses a rotating drum with a heat source under it, usually a gas flame.  The rotating drum tumbles the beans, very akin to a clothing dryer, assuring an even roast.  The air temperature inside the drum is usually controlled at about 500 degrees F; for the first five minutes, the bean merely loses “free” moisture, moisture which is not bound up in the cellular structure of the bean.  Eventually, however, the deep “bound” moisture begins to force its way out, expanding the bean and producing a snapping or crackling noise.  So far, the color of the bean has not appreciably changed (it should be a light brown), and the oil has not been volatilized.  Then, when the interior temperature of the bean reaches about 400 degrees F, the oil quite suddenly begins developing; chemists call this process pyrolysis; it is marked visually by a darkening in the color of the bean.

This is the moment of truth for the coffee roaster, machine or human, because the pyrolysis, or volatilization of the coffee essence, must be stopped at precisely the right instant to obtain the flavor and roast desired.  The beans cannot be allowed to cool of their own accord, or they may over-roast.  They are quickly dumped into a metal box, where pyrolysis continues until “quenched” with either cold air or a light spray of cold water.

Given a good quality bean, roasting is probably the single most important factor influencing the taste of coffee.  The significant variable is the length of time the coffee is roasted.  The longer the roasting, the darker the bean.  The darker the bean, the more tangy and bittersweet the flavor.

As we have learned, the roasting of coffee turns the beans brown; the longer they’re roasted the darker they get.  Coffee roasted too light won’t have much of a coffee taste at all.  Coffee can also be roasted so dark that it tastes burnt.  Between these two extremes are a variety of roasts all tasting like coffee, each appealing to particular tastes.

Below is a chart of five different roast levels along with their common names and characteristic tastes.

The overriding factor, in determining which roast to assign a specific coffee, is which roast brings out the true varietal characteristics of said coffee.  For example; dark roasting a high-grown Costa Rican coffee will mask the bright acidity and clean cup character so prized in high-quality Costa Ricans.

Want to learn about the latest coffee talk from Jen Stone? Sign up - it's free, no spam, and never more than once per week.

Email has been submitted.